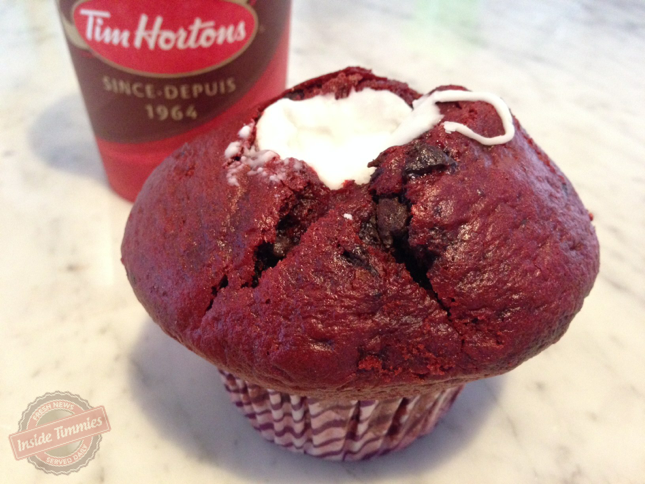 “Our new Red Velvet Muffin with real chocolate chunks is the perfect remedy for January blues.”

That is what Tim Hortons recently declared on Twitter. Sounds delicious enough to go right down the street and spend your hard earned money on one. That’s exactly what I did.

When the words “Red Velvet” are spoken I think of elegance, decadence and something that should be raised high upon a pedestal. This type of dessert usually comes in the form of a cake, not a muffin, but there’s a first for everything, especially when there’s a buck to be made.

The Tim Hortons version of the Red Velvet muffin is eye catching. The actual muffin has this deep red, almost maroon, colour. Smack dab in the middle is white icing that encompasses the entire center and is the same coating found on their cinnamon bun. I even believe that Timmies decided to include a special muffin wrapping to hold everything in place – this is also coloured deep red and white.

The smell of the Red Velvet muffin is amazing. Even an hour after purchasing this delight the aroma is so incredibly inviting – almost luxurious. As expected, the top of the muffin is hard from being in the oven, but cracking it open reveals a moist muffin just wanting to be eaten.

The first bite is delicious and your taste buds get gently bumped with the chocolate chunks. Not chips, but chunks of chocolate, which is exactly what this muffin deserves. The dough is soft and melts away in your mouth. I’m generally not a fan of icing as it’s always a bit too sweet for me. Thankfully, the Red Velvet muffin I purchased didn’t come with an explosion of icing and it was over before I knew it. The icing itself tastes like a big dose of sugar.

As for the nutritional value of this muffin, well, it’s not the most healthy choice. However, when you say you want the Red Velvet and not the blueberry bran you know what you’re getting into. The serving size is 120 grams and there’s 430 calories. Packed into this gem is a total fat content of 17 grams, with 64 carbs and 34 grams of sugar.

The Red Velvet muffin is more of a treat than a morning snack. Highly recommended.

Near perfect piece of muffin heavenRed Velvet. Enough said. Drop what you're doing and head down to your local Timmies and buy one. Your stomach will love you for it.
Presentation90
Taste95
Freshness95
Satisfaction95