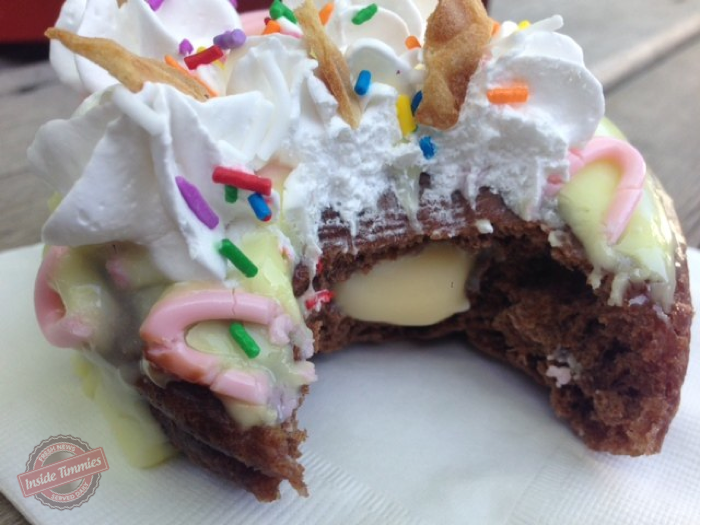 The current Tim Hortons menu is filled with colour and flavour. While there are fan favourites, such as the Chocolate Dip, Honey Cruller and Boston Creme, perhaps in the coming months we’ll see the Ice Cream Sundae arrive.

This gem was dreamed up by Jennifer Veenvliet of Barrie as part of the Duelling Donuts competition. Her creation, which was a family affair, looks like a party will happen in your mouth when eaten. Staring at the Ice Cream Sundae donut simply makes you happy and would have been a solid substitution for Tim Hortons Birthday Cake donut.

We cannot vouch for the nutritional value as it’s currently in the running against three others to possibly claim a spot on the Timmies menu. The Ice Cream Sundae is a chocolate yeast filled donut that garners attention. The actual donut portion seems to be the same base as the Oreo donut and comes topped with pineapple icing, five dollops of whipped topping (perhaps to signify Tim Hortons 50th anniversary), a few scattered shards of waffle cone, rainbow sprinkles, and finally drizzled with strawberry icing.

Holding the Ice Cream Sundae donut in your hand you immediately become careful not to destroy its looks. I liken it to opening a birthday gift and saving the nice wrapping paper to later reuse for a re-gift. You don’t want to crinkle the paper because it’s so beautiful, but inevitably a rip happens and all is lost.

The first bite into the Ice Cream Sundae donut is a spectacular surprise as the whipped topping basically covers your face. Once your teeth dig in you’re welcomed with the inclusion of a banana filling that pours out from the middle. The combination of all the flavours is gentle on your taste buds and not overpowering. The donut portion was fresh, soft and chocolatey, while the toppings added a boost of goodness. The shredded waffle cone was a necessary addition, mainly because of its name, but it might be a bit too crunchy to include in a donut — perhaps smaller pieces.

The Ice Cream Sundae donut also seems it would take the Tim Hortons bakers a few extra minutes to make, which would certainly be worth the time. A baker would make the chocolate donut base, fill it with banana filling, cover it with pineapple icing, put whipped topping, sprinkles, strawberry drizzle, and waffle cone on top. A total of 7 glorious steps.

This masterpiece is going head-to-head against the Big Canadian Red, Lumberjack, and the Love REESE’S To Pieces in the Tim Hortons Duelling Donuts competition and the winner scores a cash prize of $10,000 and the donut will go on sale “for a limited time within the next few months.”

It's a donut that looks like a partyThe Ice Cream Sundae donut will not cool you down on a hot day, but will feed your belly with sweetness. This masterpiece is easy on the eyes and will surprise you with the present waiting on the inside.
Presentation95
Taste90
Freshness90
Satisfaction85