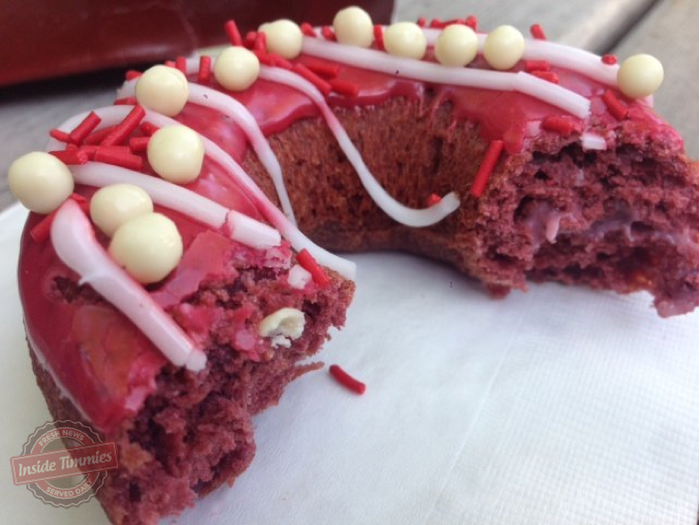 For anyone loyal to Tim Hortons this will pull at your heartstrings. This circular gem has a red velvet base that resembles the recent Red Velvet Muffin of last year. The colour is dark, rich and pops with an abundance of extras. Staring at this delicate donut you become fixated on the cherry icing that gently covers its top. Or quite possibly it’s the white icing, white chocolate “crispy pearls,” or the inclusion of red sprinkles that might get peak your interest. Yes, this is loaded up on sugar and looks spectacular.

Apart from the glorious vanilla filling, the joy of this donut comes alive when one chomps down on the white chocolate “crispy pearls.” The little morsels are worth a vote and burst in your mouth with flavour. The chocolate is subtle and if you’re so inclined you might even want to pick them off one by one to savour its essence.

Nikola Kostic of Toronto is the creator of the BiG Canadian Red and I can see why he decided to add in the sprinkles, but I don’t believe it does much for the overall experience or taste. Yes, another layer of texture is present, but the increase in sugar is not. Unfortunately we have clue of the nutritional information as this is not a current Tim Hortons menu item.

What might hold back the Big Canadian Red from winning is that it kinda looks ordinary compared to the others in the race. We somewhat expect Timmies to add a donut like this to its menu. Overall, a good show and decent donut.

If this does win the $10,000 prize and a spot on the menu, couple it with Chris De Burgh’s “Lady in Red” and you’re in for a phenomenal night.

Red, classy and delicateIf you're into red velvet and chocolate then the Big Red Canadian is for you. It's a joy to handle and can probably be eaten in 4 bites.
Presentation90
Taste85
Freshness85
Satisfaction80