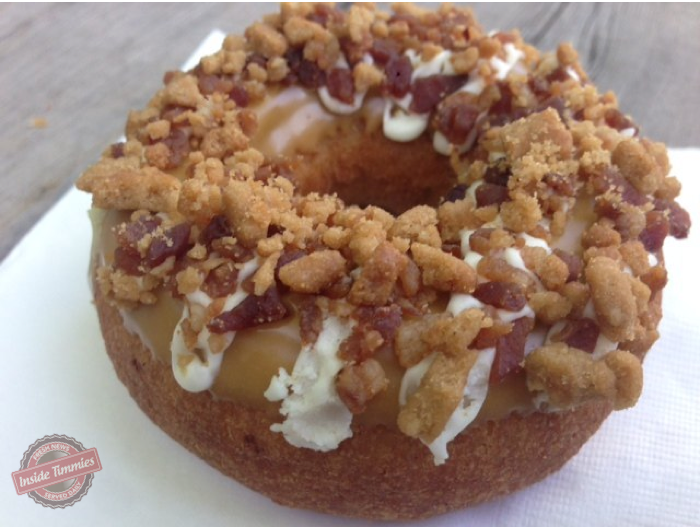 Bacon. There you go. This review is over.

When bacon is added to mix the world stops to salivate and admire its beauty. The Tim Hortons Duelling Donut competition this year saw the inclusion of this tasty gem with a creation called “The Lumberjack.”

The man behind the Lumberjack donut is Judd Mah of Edmonton who proudly stated in his pitch, “Who couldn’t use more bacon!” We concur. The name derives from the famous lumberjack breakfast that includes 3 eggs, ham, bacon, sausages, and a plethora of pancakes. To come close to making this in a donut format, Mah decided to have the donut come with an Apple Cider base, topped with maple fondant and Cream Cheese icing, then the magical love of bacon and Graham crumble sprinkles.

The description declared that the Lumberjack donut will “will satisfy the hard working early riser who won’t settle for a fru-fru donut.” This might be a stretch, but the bacon draws you in. Biting into this donut brings some heavy expectations, mainly because there is bacon — which is the holy grail of food.

First, it smells amazing. The bacon was inviting and not overpowering. I could smell the maple and the Lumberjack donut was light to hold. Homer Simpson once said that “the anticipation is greater than the goal.” He was talking about beer, but this is true with the Lumberjack donut. While I wanted to enjoy the glory that bacon brings, this donut was dry and left me wanting to down a coffee.

The Lumberjack was all sorts of confusion. The combination of the Apple Cider base, maple, graham crumble and bacon was a miss… which was unfortunate as it held so much promise. The bacon, while moist and chewy, was a very Canadian aspiration, but in the end was a let down. Perhaps instead of being on top and cluttered with all the other ingredients, Mah should have embedded the bacon inside with a maple filling.

Bacon in a donut. So much promise.Bacon is a risky choice to add to any menu item as it comes with such promise. The Lumberjack was a solid creation, but there was too many individual ingredients that were competing for attention.
Presentation85
Taste80
Freshness85
Satisfaction80