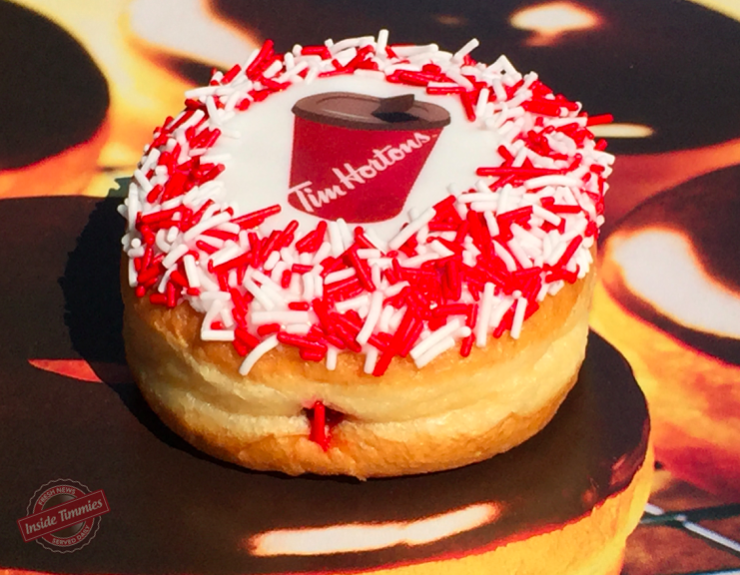 These donuts are rare. Actually, they are not sold in restaurants and our friends at the best place on Earth sent us a box to highlight its recently released emoji app on Android and iOS.

In total, we gobbled down 12 donuts and all were filled with some sort of glorious filling. The emojis were the Tim Hortons coffee cup, maple leaf, barbeque, beaver, Muskoka chair, heart-shaped flag, moose, fireworks, Inukshuk, “Eh” in English, “Tsé” in French, and a toque.

We devoured the Tim Hortons cup donut in this quick review — something I can now cross off my bucket list. At first glance this limited edition donut is an eye pleaser. The Tim Hortons cup emoji donut is a yeast filled donut that is graced with Canadian love as it has red and white sprinkles on top. The Tim Hortons cup design is an edible decal is everything I imagined eating a cup would be like, minus the killing of trees. Sweet and flavourful.

Biting into the donut was a pleasant experience as it was fresh, soft, and delicious. I was thrilled to see the Canadiana continued on the inside as a rush of strawberry filling came pouring out. I completely demolished the Tim Hortons Cup Ehmoji donut in four bites and could have done it in three, but wanted to stay awake and not upset my stomach by the influx of carbs.

For those interested in the nutritional value of this donut will have to look somewhere else, but it has a decent amount of sugar… and it’s wonderful.

A generous amount of filling dripping out of this #timhortons EHmoji donut. Checkout our review on insidetimmies.com

Ehmoji AwesomeThe exclusive and elusive donut is a joy to be in your belly and has 12 emojis to satisfy your taste buds. If you can find this rare beast grab hold and eat them up.
Presentation92
Taste90
Freshness90
Satisfaction90