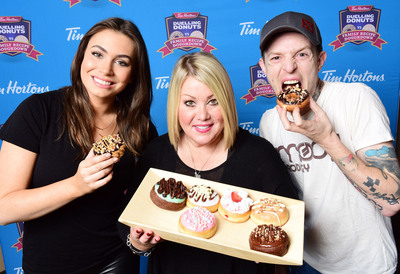 Here they are. The list of donuts vying for shelf space at your local Tim Hortons next year.

Duelling Donuts judges Jann Arden, deadmau5 and Sophie Tweed-Simmons have selected the Donut Pass on this Banana Bread, Key Lime to my Heart, French Toast Deluxe and the Mint Brownie Cheesecake to move forward to the next round of voting, which is where the general public comes into play.

These four semi-finalists will embark on a 12-day voting period and the winner will be announced on September 1st and score $10,000 in cash. In addition, this year will see the top two donuts appear on the menu.

Here is a complete description of each donut:

“We tried eight incredible pieces of heaven, and heard the fun stories behind each one,” said Jann Arden. “Narrowing the field to four was almost impossible. Each donut was so good in its own way and all eight contestants showed a true passion for their family inspired recipes.”