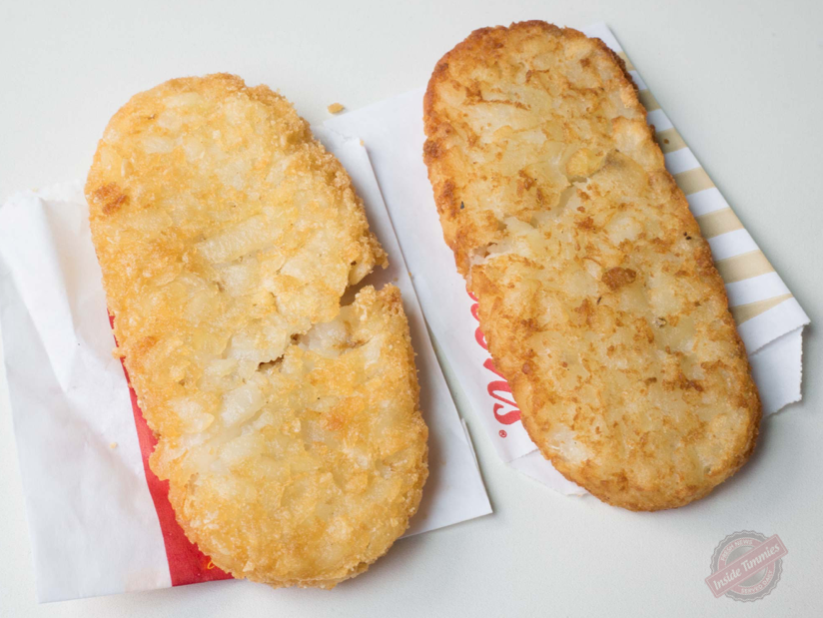 The definitive review and in-depth reporting you have demanded and expected from InsideTimmies. This is our updated head-to-head showdown of the Tim Hortons Hash browns versus McDonald’s Hash browns. On this glorious panel are some of the most powerful tech elite reviewers in Canada. Bask in their glory for the written word and pine in their creative mindset for how they drop the sweet hash brown thoughts. 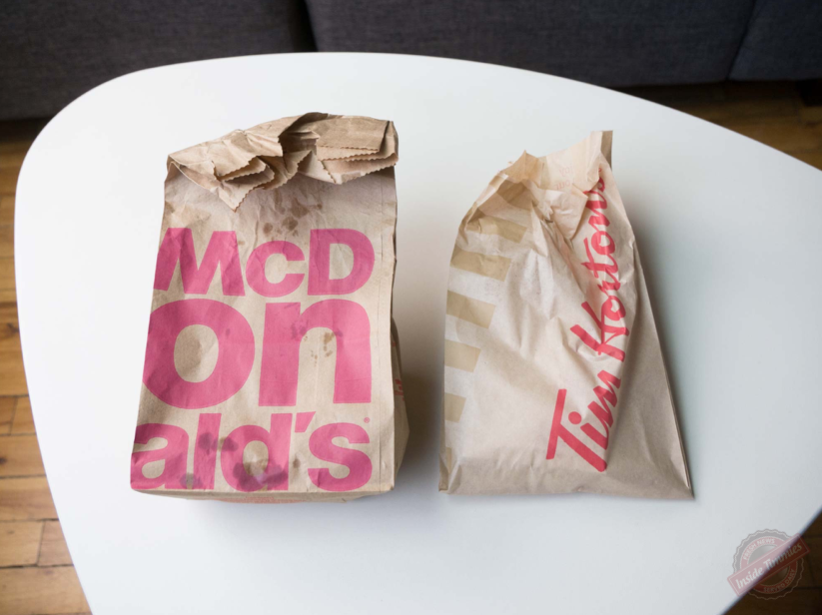 First of all, the presentation tells a lot about the two products going into this taste test. When observing the two hash browns side-by-side on the table, there is something more inviting about the Tim Hortons’ product. Perhaps it is the more neutral brown colours on the packaging as opposed to the more abrasive reds on the McDonald’s wrapping. Or perhaps it is just the fact that there was plenty of grease on the outside of the McDonald’s packaging when we took them out of the bag.

After trying the Tim Hortons’ hash brown, it was mushier in texture and more potato-like, no doubt because it is baked as opposed to fried. It tasted fine and is a product I could see myself eating multiple at once of because it’s more neutral in flavour and easier on the stomach. That said, the Tim Hortons hash brown is smaller than McDonald’s for a similar price. It sort of reminds me of how their doughnuts continue to get smaller, actually. (Don’t think we don’t notice, Tims!)

Then there is the McDonald’s hash brown, which right from the beginning you can tell you’ll be an adventure from all the grease that seeps through the takeout bag. From the first bite, you can taste the grease as it works its way down your throat and it leaves a greasy aftertaste no matter what you consume afterward. Yet, the product is crispier than Tim Hortons and much more flavourful. It’s in your face, yet comforting. It’s exactly the kind of product you’d want to have at 1am at a 24-hour McDonald’s after all-day breakfast launches here in Canada.

So who wins? If we are judging strictly on a taste basis, McDonald’s wins. It’s greasy, crispy and scratches the junk food itch. However, if we are talking about eating a bunch of them at once, I could see myself eating more of the Tim Hortons hash brown due to its lighter and more neutral flavour.

That said, I can only choose one and my vote goes to McDonald’s. 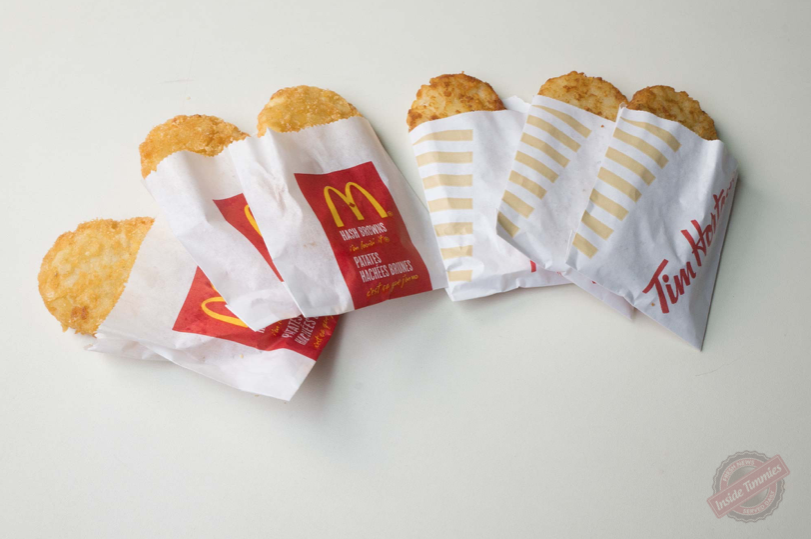 On one side of the argument, McDonald’s hash brown is the clear winner in this contest for the ages, though eating it feels reminiscent of ingesting a giant ground-up greasy potato.

Case closed, right? Unfortunately, all that grease (you can literally see it dripping off the back in the above photo) doesn’t bode well for my stomach. So, while I prefer McDonalds breakfast potato offering, in almost all situations I’d opt for Tim Hortons’ less greasy hash brown, if only because I know it won’t make me feel ill for the rest of the day.

Tim Horton’s hash brown is also more aesthetically pleasing, emanating an inviting golden glow that’s difficult to resist. Texture wise, however, it falls behind McDonald’s hash brown. I prefer the potatoes in my hash brown to be finely ground and that’s not what Timmies is selling with its breakfast side dish.

As I chomp down on Tim Hortons’ hash brown, I’m actually able to feel select chunks of potato, whereas McDonald’s hash brown features a texture that’s more consistent and reminiscent of potato paste. Of course this all comes down to personal preference, but I prefer the latter, smoother option.

All in, it’s difficult to find a true winner in this epic battle. I do, however, have to give it to Tim Hortons’, if only because the company’s hash brown offering doesn’t make me feel ill. 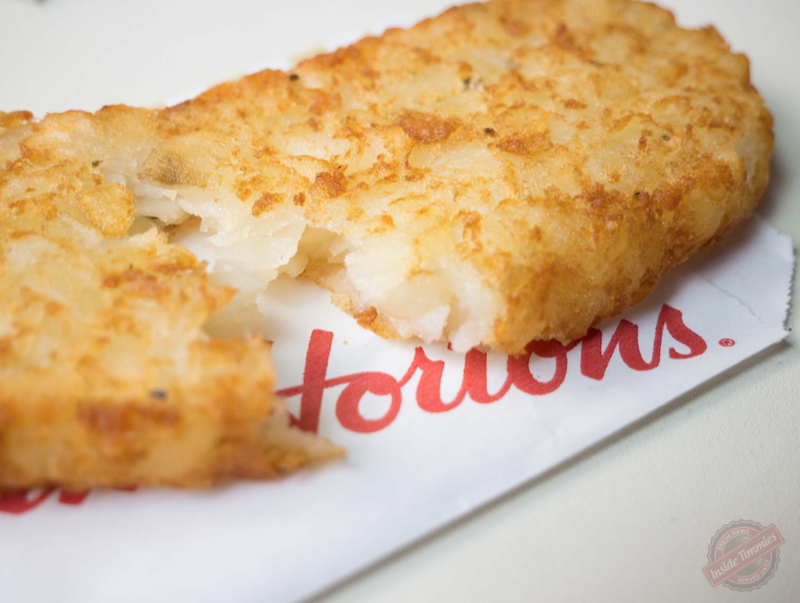 This is a Tim Hortons hash brown

I’m a big fan of hash browns; they’re a wonderful breakfast item that can also double as a great side to a lunch or dinner.

Recently, I was presented with a near-impossible choice: should I get a hash brown from Tim Hortons, the Best Place on Earth™, or from McDonalds, the biggest fast food chain on Earth?

Ultimately, I have to say that Tim’s hash brown is a little too soft for my liking. While it has a perfectly respectable (if inferior) taste, it lacks the crispy nature of its McDonalds counterpart. There’s nothing quite like a satisfying little crunch, and this is where McDonalds trumps its competition.

Patrick, who also took part in this social dilemma, noted that you’d feel terrible for the rest of the day after having the more grease-filled Mickey Dee’s hash brown. While he’s not wrong, I would say that one should have already mentally and physically prepared himself to feel that way in the first place if he was planning to go to McDonalds. It’s hardly a place you’d go to if you want to find “feel good” food. I mean, we all know that we’ll feel nauseatingly overstuffed after a buffet, but we still go and enjoy it anyway, no?

I’m all about those Tim Hortons potato wedges, though. 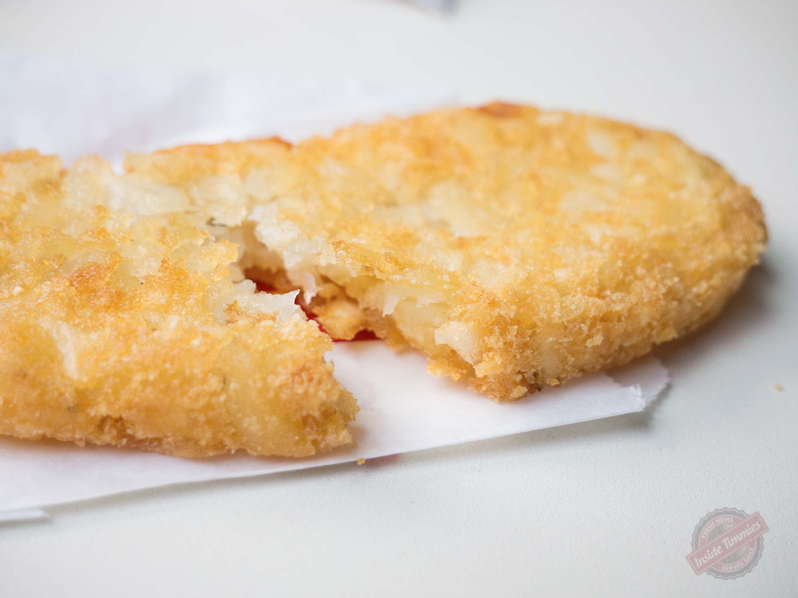 This is a McDonald’s hash brown

Tim Hortons runs through my body and is part of my soul. Upon creating this glorious challenge I went in with a bias towards the greatest place any human has ever crafted together. However, as a person who loves challenges, I decided to once again test the Tim Hortons hash brown agains the McDonald’s hash brown.

Presentation of both potato side dishes looks the same with its paper pocket, but the McDonald’s variant is laced with grease. Like a puddle of it. At first glance, yes, the McDonald’s hash brown is larger, thicker than Tim Hortons, which leads to more value for the price.

The is no competition when it comes to taste. The Tim Hortons hash brown is delicious, golden brown, crispy… and still tastes like a potato. When I ate the McDonald’s hash brown I felt it had larger chunks of potato, however, it was masked with the unsettling feeling that I was one step closer to death with the amount of fat in my body. 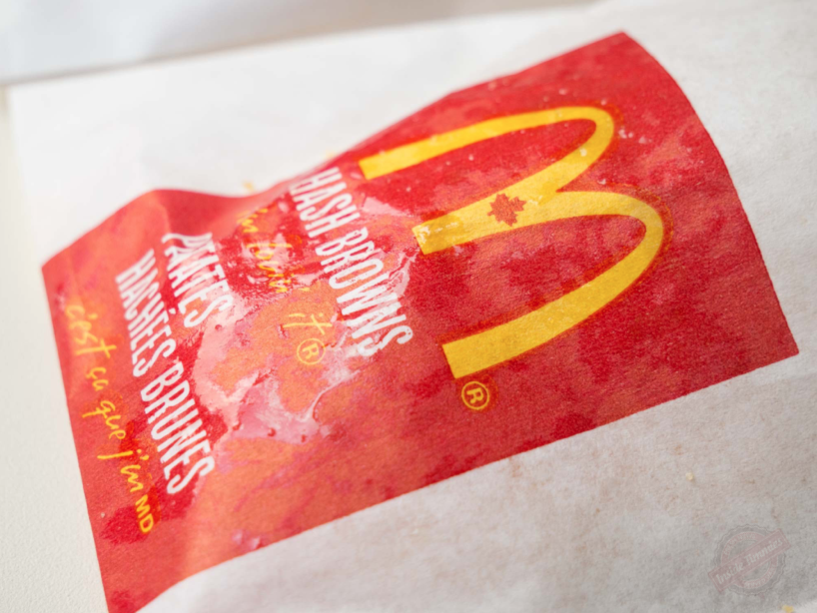 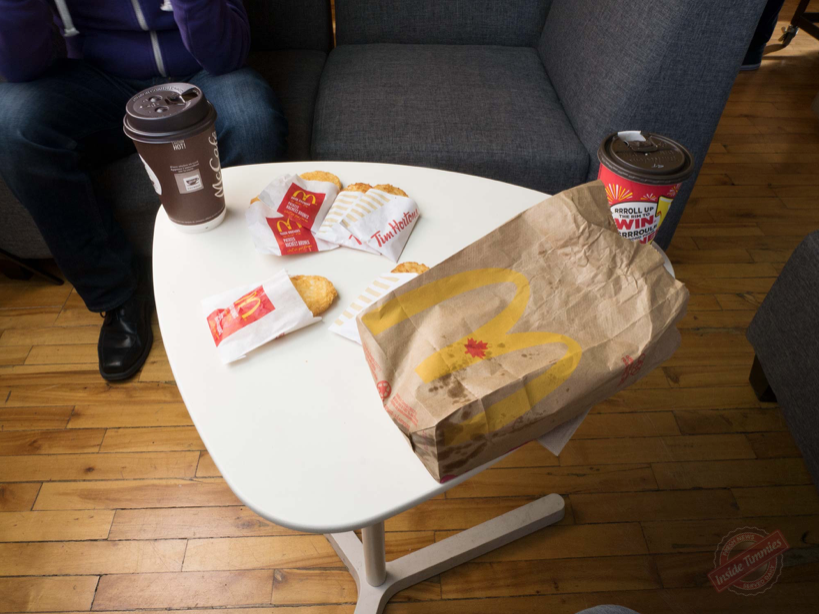